If not all eyes are fixed on the Tokyo Olympics, at least several hundred million are at any given time.  Other eyes are fixed on the growing number of COVID-19 infections increasing among the un-vaccinated in particular, the ghastly flash floods in Germany and Belgium, and the starving kids in Yemen and Ethiopia, hapless victims of the US-supported struggle against Middle Eastern insurgents. Watching the evening news can be hazardous to your mental health as such accounts are interspersed among ads for toothpaste, pain medication, pet food, and allergies. It is at least mind-numbing.

Two of today’s readings focus on feeding the hungry, and the middle one tells us how and why. We are taking leave from the

gospel of Mark for a while, turning to John’s account of the Feeding of the Multitude, prefaced by a snippet from the Book of Kings describing how the prophet Elisha managed to feed a hundred people with twenty barley loaves and what was probably roasted barley still “in the ear” – unshucked. It was an amazing feat, but only a prelude to an event on a hillside in Galilee 800 years later.

The gospel account, or accounts, of Jesus’ feeding of the multitude provided the point of attack for the rationalist German scholars of the late eighteenth century and their followers, whose rejection of anything  miraculous required another explanation. It was difficult to deny that the event had occurred, because it is found in all four gospels—possibly twice-told in Mark and Matthew, all of which argues that it was deeply entrenched in early Christian memory – the three synoptic gospels, the so-called Q-document, and the Johannine tradition. The differences in detail from the number of loaves and fish to the number of those who were filled and the baskets of leftovers are themselves supportive of different lines of transmission.

The early hermeneuts of the Enlightenment did not deny that four or five thousand (or ten thousand, counting women and children, as Megan McKenna reminds us) had enough to eat.  But for them the “miracle” was nothing supernatural (of course) but an adroit act of persuasion by which Jesus induced the vast crowd to share the chunks of barley bread and dried fish they had cleverly tucked into their tunics before setting off spontaneously in pursuit of the young preacher on a hillside somewhere near the town of Bethsaida.

Conversely, the evangelists insisted that in their fervent pursuit of the young preacher no one other than an enterprising young lad with a few loaves and fish had thought of bringing anything to eat. But the accounts also point out that everyone was short of cash anyway. And the crowd was understandably getting very hungry. But let that pass, as the Enlightenment scholars were quick to do. In the end, the only item in their account that they rejected was the miracle itself.  It did not seem to occur to them that accepting the account of the event without the main point was literally pointless.  Why accept any of it? And why, not to put too fine a point on that, too, did no one at the time, including Jesus’ opponents, insist  that the multiplication (actually the division) of the loaves and fishes had a simple, psychological explanation? Why swallow the camel to avoid the gnat?

In the end, we are left with a good lesson in selective interpretation guided by prejudice. And the bottom line? Perhaps the Enlightenment critics were right about one thing – Jesus is still exhorting us to share the food we are hoarding with those who hunger and thirst not only for the gospel, but for real food and potable water. That miracle is only awaiting our compliance. Here the Letter to the Christians of Ephesus is perhaps especially meant for us today:

“There is one body and one Spirit,
just as you were called to the one hope of your calling,
one Lord, one faith, one baptism,
one God and Father of all, who is above all and through all and in all” [Eph 4:5-6].

Every time history repeats itself the price goes up. —Anonymous

From My Photo Album
The price of safety is eternal vigilance 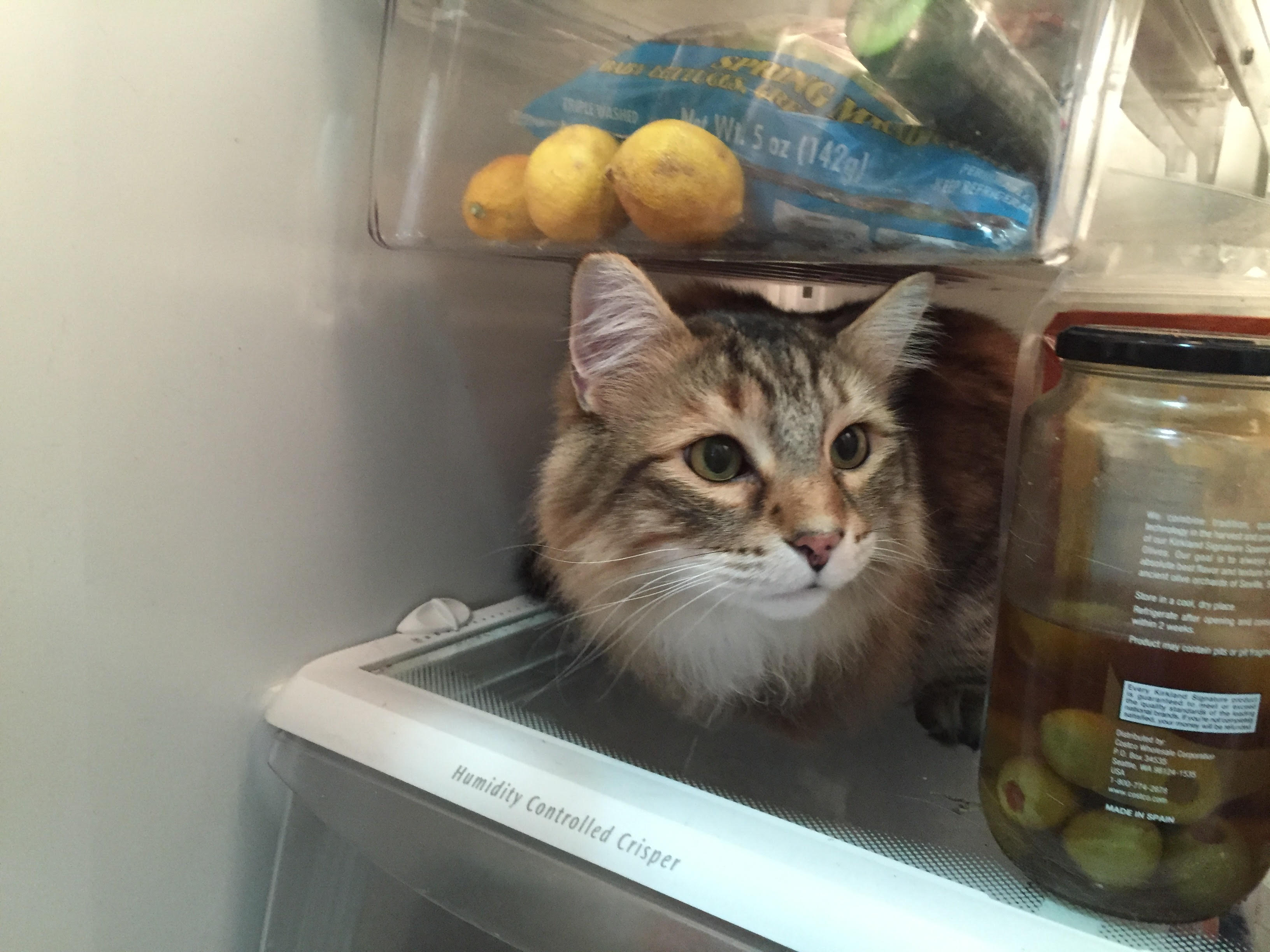 Cairo continues to watch over me. Here he is checking the fridge for possible intruders. (Or is he just trying to keep cool?)