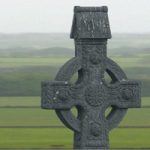 Celtic Spirituality: Ancient Heritage and Living Legacy explores important aspects of the spiritualities that animated the lives of the Christian peoples of Ireland, Britain, Scotland and other regions that once covered most of northwestern Europe and continues today in a variety of forms in many parts of the world – wherever necessity or adventure led emigrants from their ancestral homelands.  This 12 lecture set was recorded on CD for Now You Know Media, Inc., Chevy Chase, MD,  in Nov.   2011.