My immediate family, even the extended version, was originally concentrated in Albuquerque, New Mexico, where I was born in 1941. We are pretty scattered now, literally from coast to coast, but manage to stay in touch by e-mail, letters, and gatherings when we can find a way to assemble as many as can travel.

My father, James Everett Woods, died in 1986, and my mother, Margaret Corcoran, followed him in 1989.

My older brother Jim and his wife, Pat, live in Maryland, and my nephew and nieces (Mike, Teresa, Catherine, and Shari) are located in Kansas, Washington, and Florida. Several of my cousins still live in Albuquerque, as well as outposts in Virginia, Nevada, Texas, Ohio, and Arizona. And probably a few other places. We spread out.

My nearest housemates, geographically speaking, have been Samantha, Pas de Chat, and Shane. During the night of June 23-24, 2000, Miss Sam, also known as Samantha and the Samcat, died of an apparent heart attack, passing peacefully into the great heart of the Cosmos.

Our great pal, Pas de Chat, the quintessential Kliban Kat (American short-hair, brindle), died on 9 August 1997. He was about 15 years old and, as I had written earlier, resembled a dignified potato on sticks wearing striped pajamas with four white socks that got him his name. (Imagine a chubby ballet dancer with four feet.)

Both felinities came to live with me by accident. My former collie, Heather, who was a pet psychotherapist (among other things), grew desperately ill back in 1978, and I was urged by the vet to find someone or something to keep her spirits up. A friend had a friend whose cat had had kittens, one of whom was declared the perfect solution.

So Sam was raised by a collie and thought she was a dog. Pas de Chat came to live with us when his former owners added a third child to the household and there wasn’t quite enough room for everyone. I tried to find him a good home, but he activated his allergy device and was, happily enough, returned. And stayed, even traveling with me to New Mexico for a while.

Shane came along in 1994 as the fourth collie in my career. I confess to partiality for the breed. I hope it is because our personalities match. But as he is young, intelligent, handsome, friendly, patient, playful, and loyal, 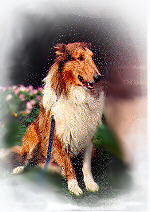 I am probably projecting. Shane eventually went to live with a fine family in Skokie, a move that I certainly found difficult but necessary because I was away from home so much. Time caught up with him, too, however, and he died in 2007.

Animals (and plants, too) have always played a large role in my life. In larger Dominican priories, providing care can be a problem, but in smaller communities, they add a more than a touch of fun, beauty, and camaraderie. And even burglar prevention.

Most of my ancestors came from Ireland, even the Welsh great-grandmothers. The Woods family (who were Protestant) settled in Missouri, where my father, James Everett, was born on a farm near Neosho in 1908. His mother was Maud Stacey, but I never knew her because she died very young during the ‘flu epidemic of 1918. (Her mother’s family name was Mathis.) I knew my granddad, however. John Orville Woods became a rancher in Clayton, New Mexico, and was also the county agronomist as well as a Methodist lay preacher. I still have his well-worn old bible, which my father inherited when “John O” died in 1969, on the same day I was ordained to the priesthood.

My mother’s side of the family were mostly Corcorans and Powers and Brennans. “Papa Jim” Corcoran had been in the Union Army during the Civil War, family legend says as a drummer boy, because he was too young to be a regular soldier. I still have his discharge papers. He died before I was born, but I knew his wife, Olive, who remarried a Swede named Gus Thielen and became known as “Mom Thielen.” She was a real pioneer. After migrating in a covered wagon from Nebraska to Colorado well before the turn of the century, she worked as a milliner in Silverton and Leadville. Sometime around the turn of the century, she moved with the family down to New Mexico, where she ran a boarding house in Albuquerque and a small hotel in the little village of Jemez Springs in the north-central mountains. Her Sunday afternoon dinners were so famous, I am told, that people would come from hundreds of miles away to partake. Olive died when I was eighteen.

My other great-grandparents were from Ireland – John Powers and his wife, Elizabeth Robinson (one of the Welsh women). They came to New Mexico from the Old Country in 1884 with their thirteen children, including my grandmother, Angelus, who was born while the Angelus bells were ringing. (Conscientious clerks tried to correct that to “Angela” but she was able to keep her rightful name even through immigration.) Her father, who had been a game-keeper in Tyrrellspass, was an ardent Catholic. Family lore has it that when he heard the Angelus bells ringing, even in Albuquerque, he would stop, even in the middle of the street, pull off his hat, bow his head and recite the proper prayers. The local patrolmen (all Irish themselves) would simply direct traffic around him until he was finished.

John Powers (Nov. 24, 1837- Dec. 1, 1916) and several of his sons worked for the railroad, which came into Albuquerque in 1888. In 1910, he and Elizabeth were honored on their golden wedding anniversary by the people of Albuquerque, who had a gold medal struck in Rome with a portrait of Pope Pius X on one side and a tribute on the other.

Angelus, my “Nana,” (1884- Nov. 22, 1957) was brought to America on a clipper ship at the age of six months, married Edward Corcoran in 1908. Ed (or “Toby” as the family always called him), ran a plumbing business where at one time or another my dad and my uncles all worked as apprentices. The Corcoran house, known to us kids as “Nana’s and Toby’s,” was the fixed point around which the family turned in the ‘forties and ‘fifties. I still return there in my dreams, although the old house has been gone for over twenty years now.

My mother and father were both born in 1908. They met on the Fourth of July in 1933. The Corcorans were out for a picnic in the Jemez country, and as the mountains were very dry and fire was a constant hazard, the cars were being checked for fireworks by forest rangers. My future father was working that summer as a ranger with one of my mother’s brothers, Tom Corcoran, who (legend has it) arranged for everyone to be at the same place at the same time. Whatever fireworks were involved came later.

Marrying during the depression was a difficult choice, and my parents found themselves in a variety of jobs. Prior to their marriage my mother had been a secretary with Kansas City Life Insurance Co. (Michael Crichton’s father, Kyle, worked in the same office.) But because married women were not supposed to hold salaried positions, she was fired.

My father, who had worked as a hand at La Esperanza, a well-known dude ranch in the Jemez country, and flown a converted JN-9 bi-plane as a barnstormer, found work at a short-order café in Albuquerque and eventually as trail cook for the road crew who laid U.S. 66 a

cross the Navajo reservation in Arizona. Later, he built the family house by himself. But just when starting up a plumbing shop in the garage, he was drafted with Toby and my uncles into the tech crew who built the secret labs at Los Alamos during World War II. My brother and I were on the scene by then. Later, Dad was drafted into the Army. Because his beloved house was “out in the country,” my parents had to sell it, and my mother, brother, and I moved into town to stay with my grandparents. The war ended before my father was shipped overseas, but we never got the house back.

It is interesting looking back at those years in the awesome light of the nuclear age. Some of my earliest memories are of the Quonset hut in Los Alamos where we lived for several months. Sometimes we were shaken out of bed in the middle of the night by the concussion of detonators being field-tested. I remember the adults making cigarettes with a hand-cranked rolling machine, and my age-mate cousin Pat describing being chased by a bear. As Los Alamos was high in the mountains between Santa Fe and Jemez, it was certainly possible. And still is, although Los Alamos is now a small city and brown bears generally stay out of town. One of my most indelible memories from that era is of my dad saying goodbye back in Albuquerque the night he left for Fort Bliss. He and Mom could only have been in their mid-thirties, and I was all of three-and-a-half. I recall him sitting on the edge of my brother’s bed, wearing his three-piece black suit, making shadow-grams of rabbits and turkeys on the wall with the aid of a goose-neck lamp. And my mother cried.

Later that spring, my uncle, Calvin Shepherd, worked on the high tower between Socorro and Alamogordo at a place called Trinity Flats. There on July 16, 1945, after he and the other workers had been driven away in curtained sedans, the nuclear age awoke the morning with a false dawn seen as far away as Albuquerque where I was sleeping snugly in my crib in the front bedroom of my grandparents’ house on Third Street. I remember all the bells ringing later that summer and being told by Nana that the war was over. I had heard the bells ring like that only once before. Everyone was crying, then, and I remember hearing that Mr. Roosevelt had died.

Twenty-five years later, on July 16, 1970, I offered a Mass for Peace overlooking the site where that first atomic bomb had so altered the course of world history.