A Diversity of Dragons 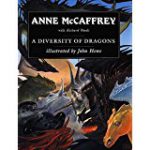 A Diversity of Dragons , a partly-fictional history of dragons I co-authored with Anne McCaffrey has been lavishly illustrated by Canadian artist John Howe, and appeared in U.S. bookstores late last September from HarperPrism. ( The English edition is published by Simon and Schuster .) Illustrating the book added two years to the project, but John’s art is so compelling, I think you will agree that it was worth the wait. (It was released simultaneously in the U.S., England, and France.)

Diversity traces the origin and development of the myth and symbol of the dragon from its earliest manifestations to its latest appearance in recent fantasy literature and science fiction. The large-format book also explores a current manifestation as Anne herself, Sean Evans, and a diminutive Irish dracologist named Epiphanius Tighe set out to investigate some mysterious events in County Wicklow. It’s available from bookstores and from Amazon.com . (The sequel, Epiphanius Tighe and the Dragon of East South Water Street , is now available from IUniverse.com’s Writer’s Choice Press. See above! )