4th Sunday of the Year

There are mysteries in today’s readings. The first reading and the third reading reflect each other mysteriously enough. But there is a further mystery of sorts, the kind that usually intrigues me as I ponder why the Church has selected these readings for today.

The second reading and the gospel follow on from last week and the week before. Not much mystery there. The mystery has to do with the first reading, which is often selected to illuminate themes in the other readings. If I were to give a title to the whole collection, I would name it “The Pains of Prophecy.”

Prophecy and prophets are mentioned in all three readings – Elijah, Elisha, Isaiah, and by his own word, Jesus. But it is Jeremiah who first attracts our attention. And the first mystery has to do with the call of Jeremiah himself, one of the most unlikely of prophets, but a model precisely in view of today’s gospel. In the Book itself, the author first goes to some pains to indicate Jeremiah’s family background and the name of his home town, Anathoth, a little village not far from Jerusalem that provides the first of several keys to the prophetic mystery we are encountering.

Anathoth was an ancient and sacred Phoenician town given to Levites from the tribe of Benjamin during the conquest. During the reign of Solomon, it became the refuge of Abíathar the high priest, the last in the family of Eli, which was lingering under a curse stretching back to the days of the young Samuel. Jeremiah might have been an indirect descendent. In any event, it was in troubled Anathoth that Jeremiah reluctantly began his ministry. And there his prophecies quickly met disapproval from his neighbors and kindred, who silenced him and even threatened to kill him. Given the tone of most of Jeremiah’s preaching, it is no wonder.

But God promises not only to strengthen Jeremiah, but, as we read in the eleventh chapter, “I will punish them; the young men shall die by the sword; their sons and their daughters shall die by famine; and none of them shall be left. For I will bring evil upon the men of Anathoth, the year of their punishment.” [Jeremiah 11: 22- 23] For the record, a few years later, Anathoth was sacked by both the Assyrians and the Babylonians and its citizens carted off into captivity.

Jeremiah’s warnings to Jerusalem similarly went unheeded. He was arrested, imprisoned, threatened with death, and eventually deported to Egypt, where, presumably he died in exile.

At least part of the mystery in today’s readings turns on a similar rejection of Jesus. He frequently alluded to the pain of the prophetic career. In today’s gospel, he seems to go out of his way to incur it. Unlike Jeremiah’s message of defeat and destruction, his is one of hope. But like Jeremiah, Jesus is spurned and threatened by angry neighbors and even family members.

His message is clear in all the accounts, as we saw last week. God’s message of salvation is open to all, not merely to the respectable, the honorable, the wealthy, or the well connected, including Jesus’ own blood relatives. Worse, the promise is directed especially to outcasts, beggars, and debtors. The wrong kind of people entirely. Jesus drives home the point by recalling the stories of Elijah and Elisha, both exiles from Israel but merciful toward foreigners, even the hated oppressor. Then, as my students might say, it gets even more worse. He cites a proverb familiar proverb, “physician heal yourself,” which they were evidently thinking about him.

Moved to fury, they run him out of town and try to shove him over a convenient cliff, a grim foreshadowing of what he will suffer at the hands of the authorities in Jerusalem. But Jesus slips by and goes on to Capernaum.

Like Jeremiah, Jesus fulfils the pattern of prophecy, inciting those who should have shown him the greatest love to murderous fury, not by rejecting them, but by reminding them that God’s mercy is complete, impartial, inclusive, and particularly directed at the outcast, the oppressed, the poor, and rejected.

The link between the prophetic pain in the story of Jeremiah and that of Jesus can be found in the second reading, which recalls the place of prophecy in the early Christian community, and, I hope, in our own.

Last week we learned that for pastoral reasons Paul ranked the charismatic gifts about which the Corinthians were quarreling, beginning with apostleship and ending with tongues and interpretation. Prophecy stood second, next only to apostleship. He has other lists, and it is not important how consistent he was, even when he introduces other items, such as the understanding of mysteries. For the one thing he is concerned about is love, greater even than faith and hope, and also prophecy.

For Paul, envy, jealousy, and suspicion create the dissension that leads to a breakdown in the community of Love that must seal God’s people. Likewise, envy, jealousy, and suspicion inspired the townspeople of Anathoth and Nazareth to reject and even try to kill their own, home-grown prophets. Our normal vision, Paul tells us, is too narrow, too limited, too partial. Even the gifts may fail to overcome this partiality if they are not guided by and eventually superseded by love.

The word now often translated “imperfect” here [meros] in fact means “part,” or “partial,” and was so translated in the older English bibles. The real contrast in these passages, just as it is in the Sermon on the Mount, is between what is whole or complete and that which is partial, incomplete, or unfinished, not yet mature.

And the word for perfect, teleios, simply means “complete” or “finished.” It does not mean “perfect” in the sense that it is taken today: “being entirely without fault or defect” (Merriam-Webster’s Collegiate Dictionary, Tenth Edition, p. 862). Neither Jesus nor St. Paul ever said that anyone had to be physically, morally, or spiritually flawless to enter the Kingdom of Heaven. Jesus even seemed to think that sinners had a foot up on the scribes, Pharisees, and other respectable people in that regard, a habit which might understandably irritate his neighbors and family.

For Jesus, God is evidently “perfect” by not discriminating against the wicked and unjust, but treating everyone with the same measureless compassion.

Similarly for St. Paul, “…we know in part, and we prophesy in part. But when that which is perfect is come, then that which is in part shall be done away with.” All partial visions, like all partisanship and partiality, will be swallowed up in the boundless sweep of God’s love.

To the extent that our compassion strives toward that inclusiveness, we are becoming perfect, as our Father in heaven is perfect. Now, as Paul says, we see things like a reflection in a bad mirror, partial and distorted, or in his Greek, ainigmatiki, which can be rendered “mysteriously.” But then, our vision will be clear as well as whole. We will see everyone in all their variety and diversity both bright and beautiful because then we will see them through the loving eyes of God. With God’s help, we can even start now. 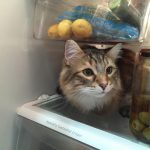 The price of safety is eternal vigilance

Cairo continues to watch over me. Here is is checking the fridge for possible intruders. (Or is he just trying to keep cool?) 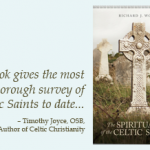